Camorra, mafia, 'ndrangheta: the rise of the Honoured Societies

The Sicilian mafia, or Cosa Nostra, is far from being Italy’s only criminal fraternity. The South of the country hosts two other major mafias: the camorra, from Naples and its hinterland, and the ‘ndrangheta, the mafia of Calabria.

Each of these brotherhoods has its own methods, its own dark rituals, its own style of ferocity and corruption. The history of these criminal organizations is little known; indeed, some of it has been entirely shrouded in myth and silence until now.  But reconstructing their story is now an urgent task—part of the ongoing struggle to rescue large parts of Italian territory from their grip.

Mafia Brotherhoods is a book of breath-taking ambition, charting the birth and rise of all three of Italy’s mafias. It blends archival detective work, passionate narrative, and shrewd analysis to bring Italy’s unique ‘criminal ecosystem’, and the three terrifying criminal brotherhoods that have evolved within it, to life on the page.

The research for Mafia Brotherhoods was generously supported by the Leverhulme Trust.

Exciting and well-written, it plays out like a 19th-century Sopranos.

An exhilarating history, powered by the sort of muscular prose one associates with great detective fiction. 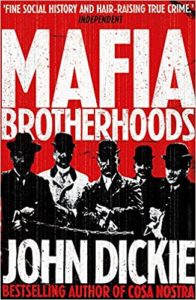