A History of the Sicilian Mafia

Winner of the Crime Writers’ Association Gold Dagger for Non-Fiction 2004.  Translated into 21 languages.  An international best-seller.

Cosa Nostra is the compelling story of the Sicilian mafia, the world’s most famous, most secretive and most misunderstood criminal fraternity.

Ever since it was born in the fragrant lemon gardens of Palermo a century and a half ago, a sworn brotherhood has pursued power by cultivating the simple, terrible art of killing people with impunity.

The mafia has been given many names since it was founded: the sect, the brotherhood, the honoured society, and now Cosa Nostra. Yet as times have changed, the mafia’s subtle and bloody methods have remained the same. Now, for the first time outside Italy, Cosa Nostra reconstructs the complete history of the Sicilian mafia from its origins to the present day, from the lemon groves and sulphur mines of Sicily, to the streets of Manhattan.

The mafia’s history is rich, sinister, moving, and surprisingly little known. Drawing on groundbreaking new research, Cosa Nostra explains how the mafia began, how it developed its rituals and its code of ‘honour’, how it kept its dark secrets, how it spread to the United States, and how it became integral to the way Italy was governed.

I couldn’t put it down. His archival sleuthing is yoked to his powerful, often coruscating storytelling to create a chilling account of the mafia’s sinister, horrific reality. 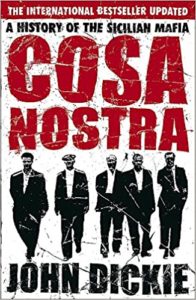